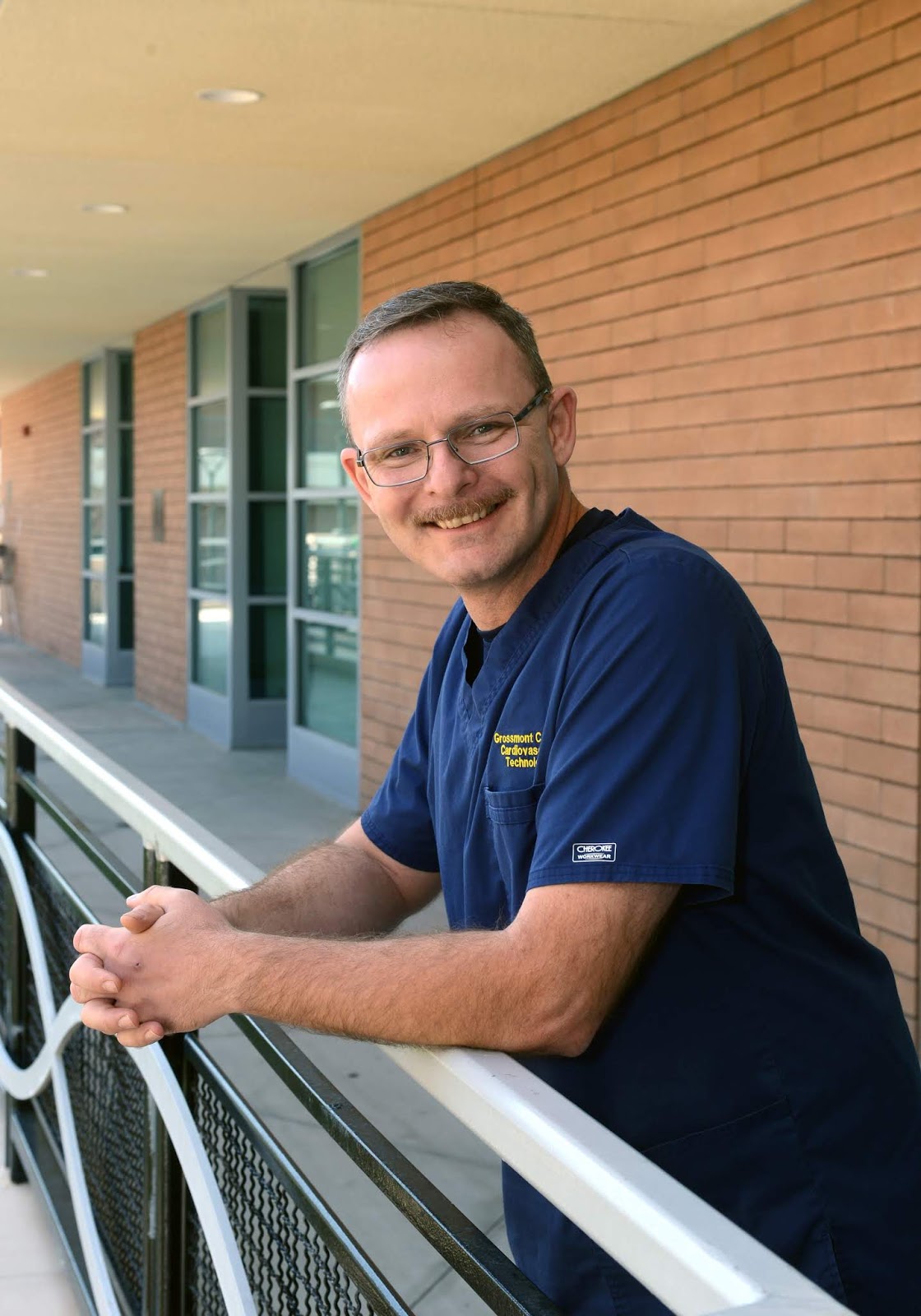 Kevin Bennett has spent his entire adult life serving others. Navy veteran. Two decades as a volunteer firefighter. Now he’s  enrolled Grossmont College’s award-winning Cardiovascular Technology Program as he prepares for a career aimed at saving lives.
“It’s a great program, a great program,” said Bennett, 45. “And it’s really well put together.  I’m not going to lie to you, though. It is very rigorous, as it should be. I’m in class four days a week and I’m in labs the other day. And that doesn’t count the hours and hours of study when I get home. But the instructors are amazing and the education I’m getting is second to none.”
Bennett’s road to Grossmont College has been a long one. He was born and raised in Farmington, N.M., some 40 or so miles southeast of where Colorado, New Mexico, Utah and Arizona meet at the Four Corners area of the United States. He enlisted in the Navy after graduating from high school, Bennett quipped, “because it wasn’t Farmington.”
Assigned to the amphibious assault ship Peleliu, Bennett spent four years in the service as a communications technician, including a tour off the coast of Somalia in 1994 . Later, during a freak accident while pulling a cable near the top of a boiler on the San Diego-based ship, Bennett fell backward and tore up his shoulder, an injury that led to surgery and rehabilitation, and rendered him unable to lift anything for months.
When he left the Navy in 1996, Bennett married, bought a modest home in the San Diego desert community of Shelter Valley, went to work as an electrician and began serving as a volunteer firefighter, working his way up to chief of the Shelter Valley Volunteer Fire Department before it became part of the San Diego County Fire Department and then the California Department of Forestry. As a volunteer firefighter, he used vacation time from work to battle the deadly Cedar and Witch fires in 2003 and 2007, respectively.


For years, he had been taking one community college class each semester, with plans to later enroll in a community college nursing program. Those plans changed after he learned about Grossmont College’s Cardiovascular Technology program and was encouraged by a program graduate to enroll.


Launched in 1972, the Grossmont College Cardiovascular Technology Program is accredited by the Commission on Accreditation of Allied Health Education Programs, and it was the first accredited program of its kind in the nation. More than 2,000 students have graduated over the years and are now working at medical centers and hospitals such as Kaiser Permanente, Scripps Health, and Sharp Grossmont, in addition to doctor’s offices and clinics around the region. Virtually every student who has taken required national certification exams after they graduate have passed the tests and secured their credential.Bennett was accepted in fall 2018 after his home-schooled oldest son moved on to college. Now he makes a daily, 70-mile round-trip commute from his home in Escondido to Grossmont College.


“Kevin is committed to this program and his studies, and he’s one of those students you love to have in class because he's ‘present’ and focused,” said Program Director Liz Barrow. “He is also a great example of our adult reentry students looking to train for a new career – healthcare being an industry that appreciates what a mature person brings to the workplace.  Kevin is respectful, kind, collegial, and responsible, and I look forward to Kevin's continuing experience in the CVT program, including his first clinical assignment this summer.  His success will be hard-earned and rewarding.  And the most exciting thing is he will be entering a career that is satisfying in that there are always challenges and you get to help others.”  The curriculum is not for the lazy. The two-year program requires four regular semesters and a six-week summer session between the first and second years of study. And that doesn’t include the prerequisite courses, courses that cover chemistry, human anatomy, physiology and more.


Bennett was among the dozens of students from Grossmont and Cuyamaca colleges who were honored at a recent scholarship awards ceremony organized by the Foundation for Grossmont & Cuyamaca Colleges.


“It may not sound like a lot, but $250 here and $500 there really helps, it really makes a difference, and we are very appreciative,” said Bennett, who was among the 15 million Americans who found themselves unemployed during the Great Recession and who has put off any unnecessary purchases while living a modest life with his wife and children. “These scholarships are helping people succeed.”


Bennett’s goal upon graduating in the summer of 2020? Working as a cardiovascular technician at an area veterans’ hospital, performing echo tests and using ultrasound to discover heart conditions and diagnose vascular problems.  “I want to be there for veterans like me, let them know that I have gone through some of the same challenges they may be going through, and make sure they understand I’m there to take care of them.”