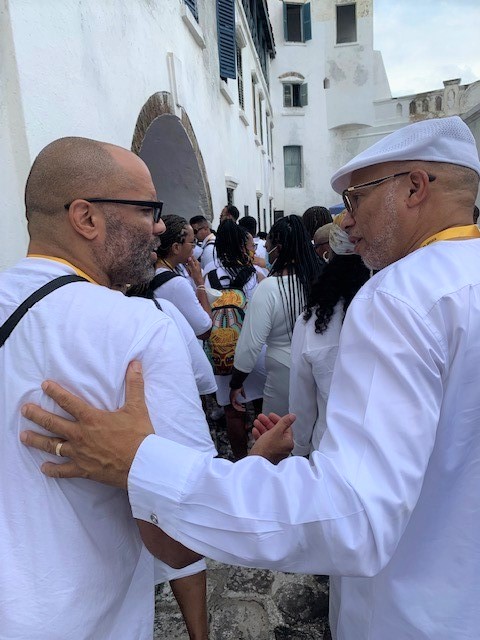 EL CAJON - A recent trip to Ghana provided a new perspective on Africa for San Diego County community college educators and students and ignited a push to highlight the important role that the continent and its people have made to the world.

“It was the experience of a lifetime,” said Michael Whyte, a San Diego City College student who was part of the group that attended the 2022 All African Diaspora Education Summit in Ghana. “It makes you look at everything differently. It puts everything in perspective.”

The summit was held at the University of Cape Coast, September 19-24, and representatives attended from all the community college districts in San Diego County–Grossmont-Cuyamaca, MiraCosta, Palomar, San Diego, and Southwestern.

Ricky Shabazz, president of San Diego City College, said the summit grew out of previous trips to Africa sponsored by the African-American Male Education Network & Development organization (A2MEND), a statewide group of Black male community college administrators and faculty members. He said more than 300 people attended the Ghana conference, predominantly from California community colleges but also from around the nation and the world.

Shabazz shared that a key goal of the conference was to discuss how to bring an African-centered education to the United States, setting aside an outdated view of a primitive culture. He hopes to develop partnerships with African universities so that students here can study abroad, and African students can study at San Diego’s community colleges. “We need to define an education that tells the story from the lens of Africa,” said Shabazz. “Very often we get a colonized view of education that allows European groups to take credit for things like mathematics and physics and medicine, which has its origins in places like Ghana.”

For many of the participants, the most memorable event of the trip was a visit to the Cape Coast Castle and the Cape Coast Dungeons, where as many as 1,000 slaves were held at a time before being loaded onto ships and sold into bondage. Sunita V. Cooke, superintendent/president of MiraCosta College, said the trip was a powerful reminder of the oppression that slaves suffered. “The dehumanization of enslaved people and a history that begins with slavery denies the incredibly long and rich history of the African people,” said Cooke.

Another notable event was a reception at a village in which the participants were welcomed home to Africa. Ronnie Hands, director of student development and health services at Southwestern College, said the ceremony changed his perspective on his identity as an African-American. “Many African-Americans are detached from Africa. Many of us have filled in the gaps in our history and our everyday life,” shared Hands. “To feel welcome is an incredible feeling for many African-Americans.”

Carmelino Cruz, acting chief diversity officer at Palomar College, said the visit made him think more deeply about the challenges that Black people face. “Even though I’m not white, I haven’t felt like a minority. I haven’t felt out of place. Now I do,” he said. “I can’t say I know what my African-American brothers and sisters feel, but it helps me to put it into perspective.”

Sam Rigby, who works with a program that aids former foster youth at Grossmont College, said that adding an African lens to education will better serve Black students. “I’m excited and eager to learn how to incorporate what we learned and apply that to our A2MEND Charter and my everyday approach to serving students on our campus,” he said.

Whyte said the visit to Ghana made him appreciate the opportunities he has for his life here. “It’s never too late. The sky is the limit. I don’t want to hear ‘I can’t do that,’” he said. “The people in Ghana are making things happen out of nothing.”

The San Diego and Imperial Counties Community College Association is a collaboration between the six community college districts in the two-county area. SDICCCA comprises the community colleges in the two-county region that together serve more than 230,000 students. SDICCCA collaborates closely with San Diego State University, UC San Diego, Cal State San Marcos, the San Diego Workforce Partnership, and other regional partners. Together, the districts and partners focus on developing and maintaining effective programs that ensure student success, serve the community, and train workers with up-to-date job skills.