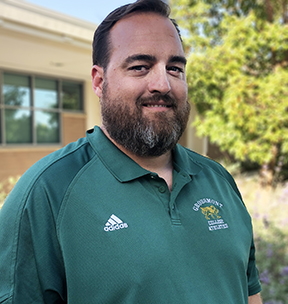 Lackey, who began playing water polo at age 9, attended Grossmont College in 2003 and 2004, after graduating from Patrick Henry High School in San Diego. At the time, he was unsure of his future. Lackey enrolled at Grossmont and thrived. He was named the Pacific Coast Athletic Conference (PCAC) Co-Player of the Year, and voted onto the All-SoCal first team and All-America first team while serving as team captain.

Lackey’s talents took him to UC San Diego, where he continued to shine; along with earning Division I and Division II All-American honors, he was named Division II MVP and was a finalist for the Peter J. Cutino Award – considered the most prestigious individual award in collegiate water polo. (UCSD water polo was granted Division 1 status in the Big West Conference in 2017.) He also led the Tritons to the NCAA Final Four for water polo.

Lackey went on to earn a pair of master’s degrees and a certificate in teaching students on the autism spectrum. A special education teacher at Patrick Henry High School in San Diego, Lackey joined Grossmont as an assistant coach in 2013. He took over the top water polo coaching spot after former Coach Brian Harvey retired two years later. Lackey led the men’s water polo team to the 2021 PCAC Championship and most recently earned the 2021 Co-Coach of the Year Award.

“When it comes down to it, I’m a perfect example of why community college is a good thing and why it matters,” Lackey said.

The CCCAA Sports Hall of Fame recognizes those who have made the most of their experiences at a California community college while maximizing their own potential to better themselves along with those with whom they come in contact. Lackey is now enshrined with the likes of baseball legend Jackie Robinson (Pasadena City College), NFL Hall of Famer Warren Moon (West Los Angeles College), and others in achieving the honor.

Lackey’s ties to Grossmont run deep. His wife, Cristen, also attended Grossmont, and his sister-in-law, Jessica Owens, is a college librarian. Lackey will be the featured alumni speaker at Grossmont College’s 60th anniversary celebration on May 3 in the Main Quad.

There’s still time to sign up for spring semester at Grossmont, Cuyamaca colleges – join us!

Voting open until Feb. 3 for East County Chamber of Commerce’s organization of the year honors