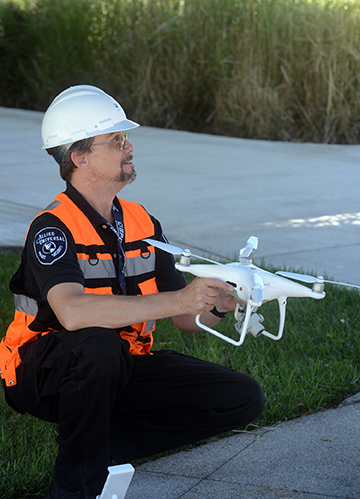 Students will soon be able to attain a certificate in the high-demand and high-pay field of drone operations at the Grossmont-Cuyamaca Community College District.

The field is in great need of highly trained workers, and college and district leaders partnered with business professionals across the region to develop the free new program. The district has long been a leading job generator in East County. Similar drone operations program supported by the U.S. Department of Labor ended last fall, after temporary grant funding stopped. The district’s governing board voted in March to expand the program this fall.

“A big part of our vision is really getting people trained for the workforce,” said Ayala, adding that previous  instruction in drone operations at Grossmont College has trained more than 200 people for jobs in the regional economy.

The proliferation of drones, or unmanned aerial vehicles (UAVs), is a testament to their popularity as a state-of-the-art tool in numerous industries. Highly trained operators control drones from the ground for myriad jobs: search and rescue operations; military missions and police surveillance; Hollywood cinematography; inspections of buildings, power lines, and windmills; studies of the natural environment; and many other applications. In the San Diego region, drone operators typically earn between $30-$70 per hour.

But getting trained can be expensive. Instruction from a private company or institution, and then certification from the Federal Aviation Administration (FAA), can cost up to $10,000. The free GCCCD program will include 105 hours of flight instruction and 75 hours of additional training in one of two tracks: cinematography or surveying and mapping. Students will be expected to pay for their pilot’s license exam with the Federal Aviation Administration (which costs $175) before moving on to one of the two tracks. Pass rates on the FAA exam for past students at Grossmont College have ranged from 86% to 91% on the first try.

Skip Fredricks, who owns Hollywood Drones and has taught drone operations at Grossmont College, said many operators today get their training from YouTube or TikTok. This is inadequate, according to Fredricks. The training offered through Grossmont College sets students apart, giving them extensive, hands-on coursework. “The skills they’ve come out with have allowed me to employ them right away in various productions and projects,” Fredricks said.

As an instructor at Grossmont, Fredricks said employers contact him all the time seeking trained drone operators. He has recommended students for jobs at other organizations he works with, including Pacific Gas & Electric, Southern California Edison, NBC, Allgire General Contractors, the Chula Vista Police Department, the California Department of Corrections, and several telecommunications companies.

“I’m absolutely thrilled to see this drone program come to fruition at the college,” said GCCCD Chancellor Lynn Neault. “There’s a tremendous demand, and I really look forward to watching it grow over the next few years.”

More than 400 people have already expressed interest in this fall’s drone operations program. The program will be offered at Grossmont College, with potential to expand to community partners, Ayala said.

Under the drone operations program supported by the U.S. Department of Labor, 267 students received training. Of those, 90% were veterans – a priority group under the federal grant. All of the 267 former students have gone on to employment at companies such as Birds Eye Aerial Drones in Santee, Hitec Commercial Solutions in San Diego, Hollywood Drones in Palm Springs, and Planck Aerosystems in San Diego.

“The drone industry is a really niche industry, and the requirements for services are growing faster than the workforce,” said Sheri Painter, co-owner of Birds Eye Aerial Drones. “Having students who have some formal instruction before they come to us is very helpful.” Having access to trained pilots who have experience flying drones is critical, especially as projects come their way that require numerous teams of operators, Painter added.

Once students complete the flight school and the specialized tracks, they can transition into for-credit programs offered by GCCCD. These credit programs, which offer more advanced training and expertise needed by drone operators, include cybersecurity, information technology, programming, data science, and programmable logic controllers.

Fall registration opens on June 27. Students can learn more about the new drone operations program by visiting the webpage here.

Media outlets interested in getting shots of drone operations can contact Michele Clock, Director of Public Information, Government Relations & Community Relations at GCCCD, at (619) 644-7842 or Michele.clock@gcccd.edu.

The district’s two colleges, Grossmont College in El Cajon and Cuyamaca College in Rancho San Diego, together serve about 24,000 students.

For information about the college district, go to www.gcccd.edu.

There’s still time to sign up for spring semester at Grossmont, Cuyamaca colleges – join us!

Voting open until Feb. 3 for East County Chamber of Commerce’s organization of the year honors